I consult with CEOs, and start-up companies to help them develop revenues, cultures of success, and position them to raise capital. Using our eSports Instruction, eSiPitch, and non-traditional Business Accelerator platforms.

Co-founder, eSportsInstruction.com, the company is focused on the conversion of eSports (Gamification), in Sports and Education. Build with the firm belief that in today’s technology-driven society that “thoughts and ideas are the most valuable commodity on the planet.” “Intellectual Property”, “IP.” is the currency of tomorrow.

He serves on several boards, the international board of directors of the (GCUMM) the General Commission of United Methodist Men, the (NAAAA) National Alliance of African American Athletes which presents the “Watkins Award”, OWACCA a Christian basketball league in Los Angeles and, Powers, Inc. which serves youth and women, in Los Angeles. He is also a former New York Jet, and played in the CFL before signing a contract with the Miami Dolphins. He attended the University of Oregon and received his Masters in Education from the University of Southwest.

My latest Book: Entrepreneur: Your Guide to Starting Your Business 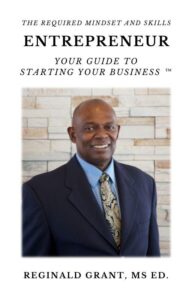 Other works by Reginald Grant

In the End, we will remember not the words of our enemies, but the silence of our friends. — Martin Luther King, Jr.

What would you do, if you knew you would not fail? — anonymous